Self cleaning coating that eats smog?

The New York based engineering materials and solutions company, Arconic, envisioned a three-mile-high skyscraper covered in a smog eating coating. It is only 2017, but the company is already looking 45 years ahead. Arconic’s engineers work with futurists to imagine the technologies that will be most favorable several decades from now. The immense skyscraper constructions consist of materials that are still in development or are relatively new to the market. The self cleaning building is a part of Arconics campain ‘The Jetsons’ as an homage to the 1962 cartoon set in 2062.

Sherri McCleary, one of Arconic’s chief materials scientists, says one of the most exciting and immediate projects is EcoClean. This is a special type of nano coating that helps buildings self-clean and purify the surrounding air. It was first released in 2011 and offers a number of benefits over traditional pane glass windows, McCleary says.”The functional coating provides aesthetics, maintenance benefits and reduces pollutants,” she tells Business Insider. 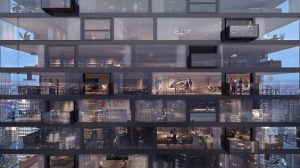 EcoClean works with help of light and water vapour which mix with the chemicals in the coating to produce free radicals that pull in pollutants from the air. It also breaks them down to get sloughed off the side of the building along with dirt and grime -almost like dead skin. The company claims 10,000 square feet coated with EcoClean “has the approximate air cleansing power of 80 trees.”

A different project that is even bigger is the Palazzo Italia. This building is showcased in Milan in 2015; and has a similar smog eating coating over 13,000 square meters across six floors. Dutch scientists also adapted an air-purifying pavement, claiming this reduces pollution by 45%. The material is not very expensive because it’s adding only 4-5% to construction costs. However, the impact of such buildings had only effect on their immediate location, and efforts to develop the concept have led to more novel  solutions.

Why use a smog eating coating?

Air pollution is now the biggest global environmental killer, the WHO has confirmed. The seven million deaths it caused in 2012 exceeded the victims of cigarettes, and is more than double previous estimates. Air pollution in over half of 1,600 cities surveyed is now above safe limits of Particulate Matter (PM). It has the highest cost borne by the poorer regions of South-East Asia and the Western Pacific. In the future, a smog eating coating on buildings can help reduce pollutants and smog and can contribute to cleaner air and so, increasing health.